At the moment a fully automated redbloc prefabrication plant is build om Plattling, which will become operational at the end of March 2014. 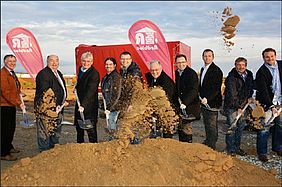 On the 29th of October the works director Mr. Christian Zitzelsberger celebrated the ground breaking ceremony together with the manager Mr. Alexander Penzkofer and the guests at the construction site in Plattling.

At the moment a 100 meter long and 20 meter wide production hall is build, which will produce prefabricated brick walls with the patented redbloc dry-fluing process according to the requirements and individual wishes of the customers. With the innovativ redbloc prefabrication system the construction time of the shell can be halved.

In future the plant in Germany (Plattling) will produce around 400 square meters prefabricated brick walls with 3 employees per shift. This allows the construction of 230 one-familly-houses per year.

redblocsystems looks forward to a fruitful cooperation with our new licensee.